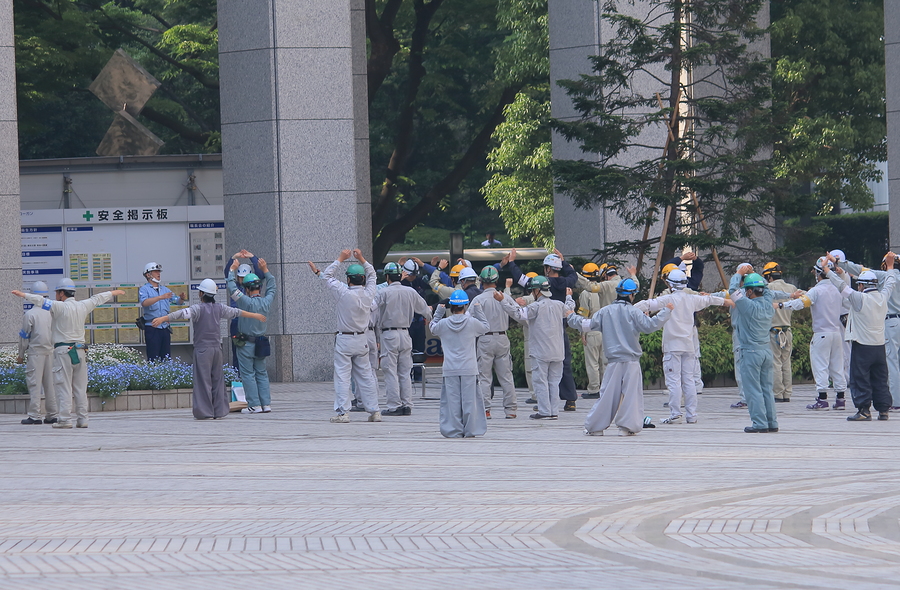 It is common for construction workers in Japan work out before a shift.

Healthy workers are almost three times more productive than their unhealthy colleagues, who take up to nine times the amount of sick leave each year.

These are the results from a research by Medibank Private who found that the most unhealthy workers took, on average, 18 sick days each year compared to an average of two sick days in healthy people.

They also found a clear association between a worker’s productivity and their health, with the most unhealthy workers logging only 49 effective hours each month, compared to the healthiest workers who clocked up 143 effective hours, almost three times the amount.

According to exercise physiologist and director of occupational health specialists, Logic Health, Eoghan Mackenna, these findings are consistent with widely accepted international research, as well as his own findings working with companies throughout Australia.

“There is a direct correlation between absenteeism, productivity and unhealthy employees, who cause the productivity of the entire organisation to suffer,” McKenna said.

Thankfully, programs to increase the wellbeing of workers have been found to provide significant returns. The Australian Government states that for every dollar invested in the health of workers, on average $5.81 for will be returned in savings.

What is an unhealthy employee?

McKenna told ProChoice Safety Gear that an unhealthy employee is generally overweight or obese and has a poor diet, is stressed, sleeping poorly and unlikely to be getting enough exercise.

“They are probably also more likely to be consuming more alcohol than is healthy and be smokers,” he said, adding that consequences include low energy levels and poor concentration.

McKenna said the impact of poor health and fitness is often amplified in blue collar industries, where hot working conditions combine with high levels of PPE to potentially cause productivity-sapping heat stress.

Furthermore, he said that increased levels of concentration, strength and fitness in healthy workers results in a safer workplace for everyone.

“If you have a fit and healthy individual, they are going to be better able to deal with a situation… and if they do get injured, their recovery times from injury are a lot less.”

There is strong evidence showing that exercise has a significant positive impact on mental wellbeing, including lower stress and anxiety along with increased morale and esteem.

“Workplaces that exercise together tend to have a good team culture, although there are many different factors that contribute to culture.”

2014 research into the financial return of investment (ROI) into workplace mental health found ROI is higher in blue collar industries – with mining providing the most significant returns with an ROI of 580 per cent return, while construction delivers a 250 per cent return.

McKenna suggests a structural approach to any workplace health program.

“Determine the core issues first. What is the condition of employees and what is that costing you?” he asked, adding that key metrics are important.

Once armed with these key figures, McKenna stated the next step is to ensure management support and then consult with employees to ensure their buy-in before designing a program.

“The program you design should really be targeted at the health issues you have identified. Pick a few initiatives to focus on across the year and set up a committee to manage the program.”

“Look at bigger long term stuff, not just a weight loss initiative; it needs to become a cultural change.”

He also stated that any program’s success must be measured

“Determine whether people are happy with the program and if it is achieving what it set out to do.”