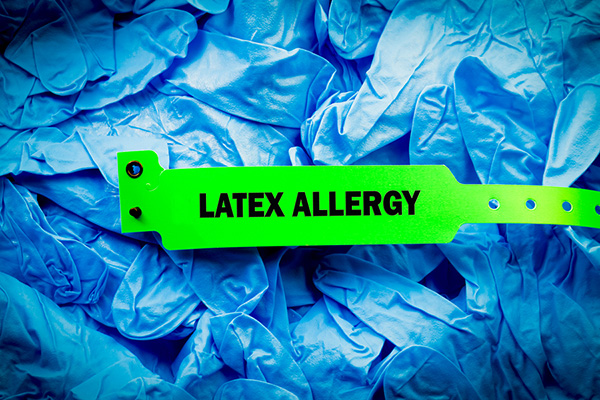 Symptoms of an allergic reaction to latex gloves can include – but are not limited to – a rash, itching, hives, swelling, a runny nose, cough and shortness of breath, according to the American Academy of Allergy, Asthma and Immunology (AAAAI).

The most common negative reaction to allergy exposure is a skin rash which is irritating but not life threatening, however serious reactions can occur, including potentially deadly anaphylaxis.

When powdered gloves are used, latex can also attach to the powder and become airborne when the gloves are changed or removed, increasing the likelihood of inhaling the allergen and causing respiratory symptoms.

There is no cure for latex allergy and avoiding it is the best option. Consult an allergist or immunologist if you think you are allergic to latex or are having negative reactions when wearing gloves.

Around 1 per cent of the American population is allergic to latex, according to the American Latex Allergy Association.

However latex allergy is more common in people who have had frequent exposure to latex over many years, such as healthcare workers where an estimated 8-17 per cent of workers are allergic.

Those who are allergic to latex are also often allergic to other substances such as grass pollen or dust mite proteins.

Most Reactions are “Irritant Dermatitis”:

The Australasian Society of Clinical Immunology and Allergy (ASCIA) says that most reactions to latex are not a “true” allergy because they do not involve the immune system. They describe reactions in this instance as “irritant dermatitis” which can result in itchy, rough, dry and scaly skin and sometimes weeping sores.

These symptoms will also increase the likelihood of sufferers developing a true latex allergy as latex is absorbed through the damaged skin.

Sweating and friction under the gloves will often make the symptoms worse, as can frequent hand washing with harsh soaps or other chemicals.

In fact these chemicals may actually be the cause of symptoms as they strip the skin of its natural protective oils. Furthermore if hands are not appropriately rinsed before being placed in gloves, the chemical can be trapped and intensified.

The most common “immune” reaction is “allergic dermatitis” which is often a reaction to the chemicals that are used to make latex gloves. Symptoms usually appear within 12 to 48 hours from skin contact and are similar to irritant dermatitis.

If you are having a negative reaction to latex gloves at work, you should try wearing latex-free gloves such as nitrile or vinyl gloves.

However there are also reports of allergic reactions to nitrile gloves and in that case vinyl gloves such as Pro Choice’s powder-free vinyl gloves are the best option.

However, according to Pro Safety Gear’s product development manager, Brad Rodgers, there is a trade-off for using vinyl gloves which are not very durable or flexible.

“Nitrile is more expensive but has good durability and flexibility and protects against some chemical exposure,” Brad said.

As always a risk analysis should be performed and choosing the most appropriate gloves should account for any potential hazards, while glove fit and comfort are also important considerations.