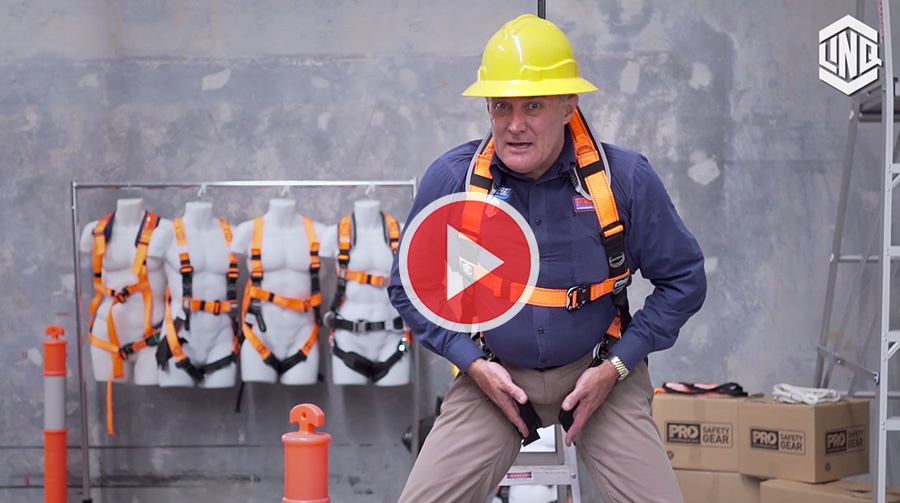 Varying design features among harness brands can lead to significantly different forces on the body in the event of a fall, potentially meaning the difference between life and death.

Chief Technical Officer of LINQ Height Safety Equipment, Stephen Sugden says that LINQ harnesses are designed to preclude a “floating” Dorsal Dee which is stabalised during the moment of impact (MOI) in a fall and is therefore unable to slide up the back of a harness and cause head injury.

Furthermore, Sugden states that the use of belay loops ensures the frontal attachment point is directly in the centre of wearer’s chest while harnesses are also supplied with a suspension trauma strap as standard equipment – except for the entry level harness where a retro fit option is available.

“These are critical harness design features to preclude moment of impact injuries in the event of a fall from height,” he says and further discusses these design features in a 2016-released fall arrest system informational video – above.

Sugden discusses LINQ’s findings that many workers are rescued unconscious after a fall as a result of violent collision of fall arrest connection hardware with a worker’s head during the moment of impact as a result of questionable harness design.

“Many harnesses have  a floating rear dee setup, a mere piece of plastic holding the dee in place, so that in the moment of impact there is a significant risk that the dee will break through the plastic holder, resulting in the dee and associated hardware smashing the back of the worker’s head,” Sugden says.

“This is a major reason fallen workers are rendered unconscious.”

In the video Sugden conducts a drop test on a harness with a floating rear (dorsal) dee using a dummy, which results in the plastic holder shifting 90mm after the fall.

He states this type of testing and further research led to the designing of LINQ harnesses with what he calls “a closed loop system” which means the dorsal dee will not move during the moment of impact.

Sugden says that despite Australian Standard AS/NZS 1891.1 requiring fall arrest harnesses have a central front attachment point, most harnesses in Australia and New Zealand have a frontal dee that is positioned off centre, in clear contravention of the requirement of the fall arrest point to be in the center of the worker’s chest.

“This significantly increases the risk for injury. The [frontal] dee or other buckle will come up and smash me in the face and at the same time, the frontal dee violently rotates causing significant trauma to the sternum,” he says.

Sugden also discusses his concern with the regards to the off-centre placement of frontal dee attachment points that seem to be proliferating the Australian market recently, mainly from American manufacturers.

He says these create a significant risk of causing vectorial (sideways) forces to be applied to the body at the moment of impact of a fall, particularly the path that the forces in the shoulder to leg strap must follow under the rib cage.

“You can bruise a rib, crack a rib or even puncture a lung,” he says.

He adds that a central front attachment point will reduce the chance of vectorial forces while appropriate length belay loops as found in the LINQ design harness will help keep fall arrest hardware away from the face during the moment of impact.

In the event of a fall and ongoing suspension (hanging) in a harness, Sugden says the tourniquet effect of the harness, combined with the effect of gravity on the body, means venus return blood flow is reduced which can lead to what is known as “orthostatic intolerance” or “suspension trauma”.

Strapped into a harness and simulating both a fall from height and ongoing suspension, Sugden explains suspension trauma.

”My heart is beating faster, my diastolic and systolic rates are plummeting as blood volume around my vital organs reduces. Other symptoms include sweating, tingling in my arms, dizziness, pins and needles, nausea, heart palpations and confusion, followed by fainting.”

He describes hanging in a LINQ harness – with its associated suspension trauma strap deployed – for over two hours while his vital signs were monitored, with no adverse reaction.

Sugden describes other critical moment of impact (MOI) factors and features important to harness safety as extensive padding behind the buckles which eliminates bruising to the worker during a fall.

“Buckle placement is also very important in the LINQ harness. They are purposefully placed high in the thigh area to ensure that at moment of impact the metal buckles are far removed from sensitive male areas, and will therefore not contribute to eye-watering moments.”

He says the design relationship between padding, buckles and the rest of the harness has also been engineered to encourage the worker to fit the harness correctly.

Furthermore, retro reflective webbing found on LINQ harnesses increases the likelihood of an expedited rescue in the event of a fall into darkened areas.