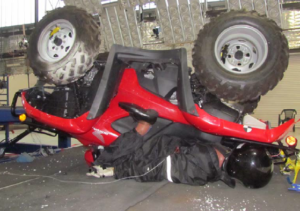 UNSW tests with quad bikes and dummies show how bikes can crush a driver in a rollover. Image Credit | UNSW

Four quad bike deaths in three weeks during February and March 2017 preceded a national quad bike safety summit and a grant of up to $2000 for farmers to purchase protective equipment, including helmets.

The successive deaths of three elderly men and a six-year-old girl were the latest in the deadly activity which is the biggest killer on Australian farms according to 2015 research from UNSW for Workcover.

The research found that quad bikes cause around 15 deaths each year in Australia, while around 1400 people require hospital treatment. Children and adults over 50 are most at risk.

Action is already being taken with children under eight banned from being quad bike passengers in Queensland from February 1 2017, as part of stricter quad bike laws that include fines for those not wearing helmets.

Further national changes will likely come from the 2017 National ATV Safety Conference – a quad bike forum held on 30 and 31 March in Cairns – which was attended by over 100 delegates including farmer groups, regulators, experts and the Queensland coroner’s office, according to event organiser, Colin Lawson.

Mr Lawson said three key legislative changes were almost unanimously agreed upon at the forum, including the formation of an Australian Standard for quad bike helmets, mandating helmet use nationally, and banning children under 16 operating adult-sized quad bikes.

“If we had everyone wearing a helmet tomorrow and no kids under 16 we would drop the fatality rate by around 80 per cent almost straight away,” Mr Lawson said.

The use of rollbars could not be agreed upon.

“There was quite a heated debate… Manufacturers say they have not seen enough evidence to prove they have a net safety benefit – that they can prevent more harm than they cause,” Mr Lawson said.

The forum saw widespread support for using quad bike-specific safety equipment such as crush-prevention air vests that Mr Lawson said will soon be available in the Australian market.

He also cited support for the Shark X16 helmet, a quad bike-specific helmet that is rated for more than 30 km/h and has better ventilation and openings for the ears to enable better hearing. It will also be available in coming weeks.

“Other quad bike helmets to date have been limited in that workplace health and safety don’t accept them for travelling more than 30 km/h,” Mr Lawson said.

A $500 government grant to NSW farmers for the purchase of protective equipment – including helmets – announced June 2016 was doubled on March 9 2017 to $1000. $2000 is available for the purchase of side-by-side vehicles which were found by UNSW to be safer than quad bikes.

The one-off rebate is offered for use to buy helmets, undertake training, retrofit safety equipment to existing quad bikes and/or purchase side-by-side vehicles, according to SafeWork NSW.

To qualify, farmers are required to engage with a newly launched online safety presentation, complete a quad bike safety course and interact with a SafeWork NSW officer.

“You will learn safe systems and how to operate the quad in a safer manner,” he said, discussing active riding – shifting your weight to counteract forces of the bike or slopes.

He stressed it is critical that drug and alcohol use is avoided as they are often involved in quad bike accidents.

Speaking of side-by-sides, he said they are safer in some circumstances but that they are not suitable for some jobs.

“People are saying get rid of your quad and get a side-by-side but in some cases a quad bike is the best vehicle for the job.”

UNSW are calling for farmers and other workers who ride quad bikes to participate in a new online survey to assist with research into the safety of quad bike use in the workplace. The Quad Bike Workplace Safety Survey (QBWSS) aims to obtain a better understanding of quad bike use and related crashes and injuries that occur in the Australian workplace. Take the survey here.