The true cost of a workplace injury 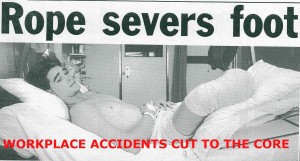 A man who lost half his leg in a workplace accident described how these type of injuries often lead to hatred, heartache, family issues and a life without purpose.

It was 1992 and Basketball Paralympian gold medallist Brad Ness, then a talented 18 year-old AFL player with aspirations to play for Carlton, was working on the Rottnest Island Ferry out of Perth.

However while they were leaving the dock, a lack of radios for communication and no documented safety protocol led to a rope catching around his ankle and tearing his foot off.

“When I woke up they’d amputated below the knee,” Ness told ProChoice.

He said the injury was a life-changer that rippled through his family and friends, with his father blaming himself for the injury because he sold the family farm which led to Ness working on the boats.

“It affects people in different ways that you can’t explain,” he added.

Ness’ own greatest struggle would be coming to terms with his injury.

“I wouldn’t wish it upon anyone to have to learn how to walk again,” he said.

Despite that, he was back working in the ferry’s offices in 12 weeks and back on the boats in 12 months, crediting this determination for meaning and purpose as the foundation for his success as an Olympic athlete.

“The importance of getting back to work for me was huge. To go back and feel needed and feel wanted. That was the reason I rehabilitated so well.”

“Everyone hates going to work until they have it taken away from them.”

Six years later, in 1998 Ness left his job to focus on his basketball career which has so far taken him to four Parlympic Games.

While he faced his injury with a “never give up” attitude, he said many injured in workplace accidents do not respond that way, with many going on benefits and chasing compensation, which he said is the wrong attitude.

“The longer you wait to start doing stuff the longer it takes to overcome the accident. It festers and stews,” he said.

“You’ve still got to live and the only way you can do that is by working really. A lot of people hang out for years for payments but by that time you’ve put on 20 kilos and lost your motivation. It’s a long way back,“ he said.

“Have it all written down and sent to the right people,” he said, adding that workers should not feel afraid to speak up about their safety concerns.

“Listen to, train and educate your workers. They are the ones who can ultimately stop an accident.”

A 2012 Safe Work Australia report estimates the total economic cost of work-related injury and illness was around $60.6 billion dollars in 2008/09 with the average injury costing $99,100. The injured worker bears 74% of this cost, the community 21% and the employer 5%.

There is also the mental toll that includes the self-esteem of the injured worker along with mental health issues that include post-traumatic stress and depression along with family and relationship breakdown.