How to prepare your construction site for a storm 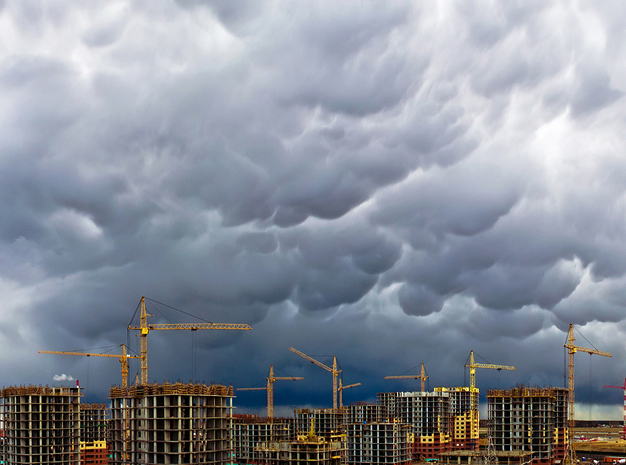 The processes for adequately preparing a construction site for a storm are similar to securing your site for a shutdown period, only even more important.

It is also a requirement under the Construction Code of Practice and Safety laws, according to Executive Officer, Safety and Risk for Master Builders NSW, David Solomon.

“There should be designated people assigned to monitor forecasts, prepare a site for a storm and/or the clean up after it. Those responsibilities should fit within people’s job descriptions and be allocated based on their existing skills and competencies,” he said.

“That may include senior management communicating directly with adjoining properties that may be affected,” Solomon said, adding that adequate insurance should also be in place.

High winds that are common during storms can pose particular dangers on construction sites and all on site materials and equipment must be secured, including formwork off-cuts, scaffolding, fencing, metal roofing, gutters and flashing, according to Solomon.

He added that shade cloth must be attached to fencing as per the manufacturer’s specifications to minimise wind resistance.

“Any partially built structures should also be appropriately braced, including concrete / masonry walls and framing, while temporary structures such as site offices and shipping containers must be secured,” Solomon said.

“Cranes should be in slew mode where possible to allow for movement in high winds and suspended loads and lifting chains removed and secured,” he added.

Heavy rain can also present problems and adequate site drainage should be set up or installed to avoid site flooding, according to Solomon, who added that all materials should be raised and secured above any known flood levels.

However he stressed the importance of drainage pits being secured with shade cloth or straw bale filters to prevent contaminants or materials entering the storm water drains and damaging the drains or ecosystem.

“Silt barriers and bunding – also known as earth banks – should also be installed to prevent the collapse of un-retained walls and sediment entering adjoining properties,” he said.

The site’s chemical register should be current and easily accessible to allow emergency services to determine what types of chemicals are on site, how they are stored – i.e. ventilated cages – where they are stored and in what quantity.

“Fuels, oils, paints and other chemicals should be placed in a bunded storage area and adequate signage erected in close proximity.”

After a storm has passed, Solomon said the site should be inspected as soon as possible and any hazards addressed, including discarding stagnant water that has ponded in excavations or pooled in buckets and other unsealed containers.

Adequate insurance covering storms is critical. If you are uninsured or underinsured, coverage can be increased, even in the event of an imminent storm, according to a Master Builder’s NSW Insurance Services spokesperson, Edwina Lyall.

However there may be conditions.

“If a storm is forecast and you didn’t properly protect works under construction against the storm, there may be issues around the claim,” Lyall said.

“It depends on the policy. Some may have conditions or exclusions, some may not. Some may have an issue around whether the storm is seen or unforeseen.”

“We would look to put in place a policy that is broad as possible and work through it with the client.”