Smoking in the workplace: OHS, legislation and policies 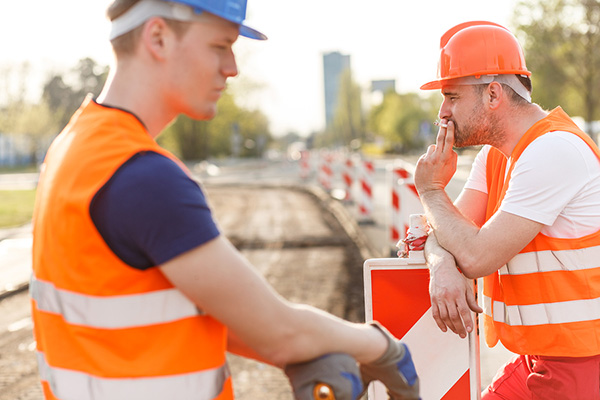 Why smoking is dangerous for the workplace

Second hand tobacco smoke is a serious OHS hazard. According to 2016 research papers, around 59 per cent of construction workers are exposed to it. For manufacturing workers, it’s 17 per cent.

These workers and others like them are facing an increased risk from one of the leading causes of illness and premature death in Australia. Those with pre-existing medical conditions such as respiratory or cardiovascular conditions are at an even greater risk.

These significant exposure levels are despite employers’ duty of care to provide a safe working environment. This extends to minimising the risks of second hand smoke exposure.

There are also legal requirements that workplaces must adhere to. While smoking legislation varies between states and territories, there are common laws. Generally, smoking is banned in all enclosed public spaces, designated outdoor places and in vehicles accompanied by a child. Of course, the age definition of a “child” varies between states.

According to the South Australian Government’s Smoke-free Workplaces guide, an area is considered “enclosed” if the area of the ceiling and wall surfaces exceeds 70 percent of the total area.

The guide states that smoking is also prohibited in work vehicles when they are used by more than one employee.

In NSW, smoking is banned within four metres of a public building (eg not residential) – including professional, trade and commercial businesses. In Queensland, a five metre permitter was recently legislated, however this is not the case nationwide. For example, in Victoria the ban is only on some buildings. Whereas in South Australia, their legislation does not restrict smoking in unenclosed entrances.

The SA guide states that “to prevent smoke drifting into the buildings, workplaces can include restrictions on smoking near entrances in their smoke-free policy”. This is a formal document addressing smoking in the workplace.

The guide encourages employers to seek input from staff – both smoking and non-smoking – when developing the smoking policy. It should outline what areas of the business will be non-smoking and to determine designated outdoor smoking areas. Clear signage is also encouraged as is the identification of tools and strategies to support workers who are interested in quitting.

The guide also suggests outlining whether smoking is only permitted in designated breaks. There is no obligation to provide workers with smoking breaks outside of designated break times.

The benefits of a smoke-free workplace:

There are other legal responsibilities that employers have to protect their workers from carcinogens and other hazards. It includes mandating a smoke-free workplace can also enhance productivity and reduce absenteeism of both smokers and non-smokers.

According to the SA Smoke-free workplace guide, adults who are exposed to second hand smoke report a higher incidence of chest illness and are more likely to take sick days.

Furthermore, the guide says that smokers are more likely to suffer workplace injuries than non-smokers.

A smoke-free workplace will also help smokers who are trying to quit or cut down as the sight or smell cigarette smoke can be a major trigger.
Lead the workplace and learn how to Identify Workplace Hazards and Perform Risks Assessment or learn how to Manage Risk according to the Hierarchy of Control.