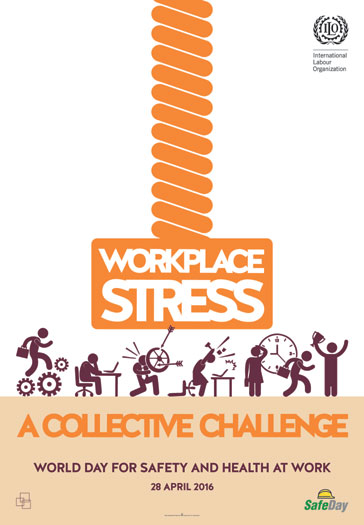 The theme of World Safety Day April 28 2016 is “Workplace Stress: a collective challenge”, drawing attention to stress causes and prevention in the workplace.

The global event, which is spearheaded by the International Labour Organisation (ILO), is held in conjunction with Worker’s Memorial Day (see below) and this year looks to highlight how technology is increasingly blurring the separation of work and life as well as causing organisational change, leading to greater stress in the workplace.

Other contributors to stress among workers highlighted by the ILO include increasingly precarious work, the fear of job loss and decreased financial stability, with serious consequences to worker’s mental health and wellbeing.

According to a 2013 Safe Work Australia report on work-related mental stress, a major contributor to stress is when workplace demands are beyond the workers’ capabilities.

Other stress contributors include work pressure, job uncertainty or role ambiguity, a lack of variety or autonomy, long or unsociable shifts, safety hazards, harassment and a lack of management support.

Pro Choice Safety Gear has previously covered numerous elements of blue collar workplace mental health, including mental health in mining and how bullying is widely suffered by apprentices as well as research that found investing in the mental health of workers offers huge financial returns, especially in mining and manufacturing.

Part of that investment should come in the form of workplace exercise programs, given exercise’s role as a stress-buster and contributing to improved general health.

Reinforcing this is research by the Australian Government that found for every dollar invested by companies in workplace health and wellbeing programs, on average $5.81 will be returned in savings.

Hazardous or dangerous work is also a contributor to workplace stress, so minimising those hazards is a critical stress reduction tool.

Worker’s Memorial Day is jointly held with World Safety Day on April 28 each year and is designed to commemorate those workers who have lost their lives or suffered a permanent injury on the job, as well as help spread awareness of workplace safety. The mantra for the day is “Remember the dead – Fight for the living”.

People are encouraged to put out a pair of work boots, photograph them and share the image on social media with the hashtag #standforsafety and #worldWHSday2016

Workers’ Memorial Day began in Canada in 1984 and has now spread to over 30 countries.